How tough is the 'toughest event' on earth?

The event is billed as one of the toughest running courses in the world, but just how tough do you have to be to finish Tough Mudder?

How tough is the 'toughest event' on earth? 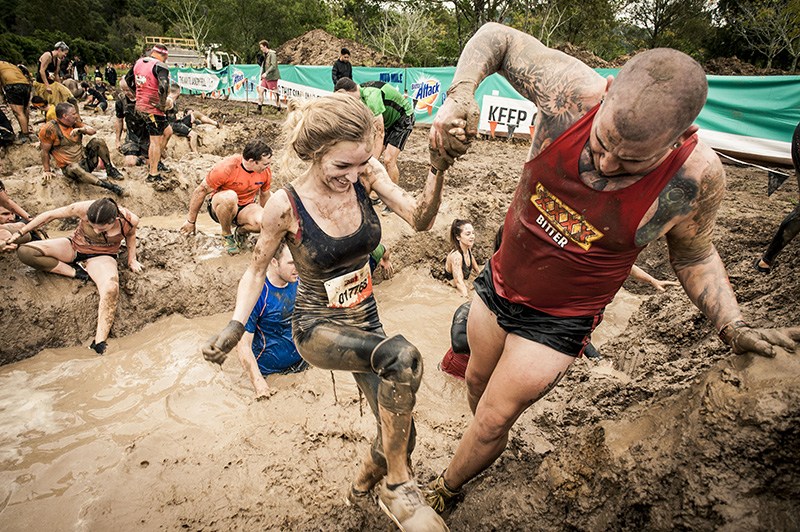 Well I came to a realisation while covered head to toe in mud last week at the event, that Tough Mudder isn't looking for who's the strongest or fittest, but rather, who is mentally tough and willing to put the needs of others above themselves.

For those who don't know about the phenomenon, Tough Mudder is a 16km + 20 obstacle course run that will challenge people's strength, stamina and grit.

However, do not get it confused for a competitive run; this is not a race where you record your time.

As the Tough Mudder pledge goes, "I understand that Tough Mudder is not a race but a challenge. I put teamwork and camaraderie before my course time."

I can pledge as a three and a half time mudder participant, or Legionnaire to use their words, that I have never recorded a time but I would argue I have lived up to the ideals of Tough.

I have run the course, helped those around me complete the obstacles and enjoyed the most well-deserved drink after the race.

What Tough Mudder seeks to find in every competitor is team spirit, indeed it was the whole premise behind its inception. More than that, it seeks to find out how tough everyone is. And believe me, during the four-hour course, you will find out.

The event is the brainchild of Will Dean and the story goes that he was competing in a triathlon in the states when his wetsuit zipper jammed, and no one would help him out.

When he finished the race, Dean realised that events like triathlons and marathons had become hypercompetitive when really part of the pleasure of doing these events was doing them with people.

And so Tough Mudder was born, a run like no other that could only be completed by helping and supporting everyone besides you.

And he's right, you cannot do Tough Mudder on your own.

Many of the challenges are specifically designed to be done with a helping hand, perhaps best exemplified by the Berlin Wall and Mount Everest.

Mount Everest is a half-pipe which you must run up before leaping forward and hoping someone at the top will grab you and pull you to the top.

The Berlin Wall is an over seven-foot fence that requires help from both the top and the bottom to get people over.

Sure, I've seen superhumans run the half-pipe without needing a leg up and I've seen people Spiderman up the wall but that's the 1 percenters. The rest of us rely on others and that is where the event finds out how tough you are.

Now, hundreds of people do Tough Mudder with you and not everyone can help. Some people cannot physically provide you with the strength needed for help, but it's usually those people that are the first to offer help.

Meanwhile, it's the people who look like they should offer more assistance that often do not. It's predominately the gym-fit young males, sorry boys, who keep running and don't look back.

Now sure they are a small percentage, but in a field of everyone helping people, it's more noticeable when some of them don't.

You have to wonder, what do they gain out of it?  The course takes ages just as the nature of it, so why not help? At most you shave 10 minutes off a time that no one is keeping track of anyway.

I would say it's telling that they are young males and there is still a competitive every-man-for-themselves spirit that is inbuilt in a lot of young men.

And this is not a revolutionary thought. A 2012 study of shipwrecks over 100 years found that men on sinking ships typically have twice the survival rate than women. So, essentially the study found that men took care of themselves first.

The 2018 Man Box study that analysed what young men thought society told them a real man was found that over 50 percent of young men believed a real man took care of their own needs without asking others.

The same study also found that a large percentage of men also believe a real man must be strong and tough and not show fears or nerves.

But I can tell you now from spending 20 minutes on Mud Mile hauling people up and over the mud hills, there is nothing more satisfying than the gratitude people show you when you help them.

And I think that the people who stay behind to help, or even offer it, are the ones that are the toughest. They are putting their needs, to finish the course and get clean and dry, second to the needs of others to complete the obstacle and, fortunately, it is the vast majority of competitors who stay back to help.

And I've learnt how tough I am in different ways every time I compete and I am sure a lot of people learn the same lessons.

The first time was with my brother and I went in competitive and eager to show that as the big brother, I was still the strongest and fittest one. That's where I learnt to accept help because I wasn't the strongest and if it wasn't for their assistance, I would have failed at the third obstacle.

The second time, I did it with my partner and I think we both learnt something about each other as even in wet, miserable conditions, we were still able to smile and enjoy the insane conditions we had put ourselves in. I mean, if we can both run through an electric field and smile, then what can challenge us really.

The short course I did on a special media day hosted by Bulk Nutrients which showed me that not every male will stay and help others over the course and maybe with age comes a bit of perspective and willingness to help those around you. Even if just one other person stays with you to help, it not only makes you feel stronger, but it will push you to try again when you are challenged.

And last weekend, I did it with my rugby team, men who are world champions in their division, and I learnt that everyone has a limit to what they can push themselves to do, and everyone reacts in different ways to that struggle. But with a team, you can push through to the end no matter what.

If you are happy to just complete the course just doing you, then sure physically you must be strong, but I wouldn't call you tough.

If you go into the course, try every obstacle, offer assistance to those around you, then I think regardless of how many obstacles you achieve that you are tough.

But the only way you will ever really know is to bite the bullet and sign up to the next one.