Health Star system set for a shake up

A proposed change to the government’s Health Star Rating system would see food products penalised for adding sugars not naturally found in foods.

Health Star system set for a shake up 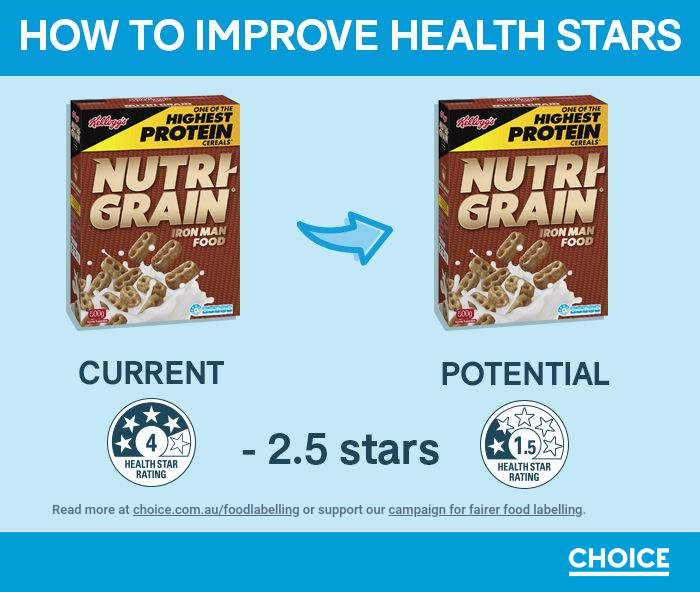 The proposal by CHOICE wants the algorithm currently used to change to penalise added sugars, with the biggest losers from the proposals set to be breakfast cereals.

CHOICE’s modelling would see Nutri-Grain go from a current Health Star of 4 down to 1.5, the same that would happen to Uncle Tobys Plus Protein.

CHOICE food expert Linda Przhedetsky said the system currently did not discriminate and treated all sugars the same, which was not fair for items like fruit.

“Right now, the Health Star Rating algorithm treats all sugars the same. The system doesn’t distinguish between the extra sugar that’s added to foods like breakfast cereals and the naturally occurring sugars in dairy or fruits.”

The new algorithm was designed by a medical research unit that would differentiate sugars and is based off a similar model currently being proposed in the UK.

According to CHOICE, the reason why a product like Nutri Grain, which is strongly associated with the Iron Man image, would lose stars is that under the proposed changes it would no longer receive bonus points for its protein content.

Instead a stronger penalty for added sugars would make it harder for cereals and other products to claim bonus points for adding protein and other nutrients to what CHOICE said were otherwise sugary treats.

“Our estimates show that some products would lose as many as 2.5 Health Stars. Including added sugar in the calculation of Health Stars will help people make more informed choices,” said Ms Przhedetsky.

Ms Przhedetsky said the system was designed to help people make better food choices, and with a few tweaks it could give out better information.

“The Health Star Rating system is meant to help people glance at a group of products to understand which options are healthier than others. Health Stars are a good system but they need to be stronger to really help people make easy decisions,” she said.

Naturally occurring sugar products like fruit and dairy would gain stars under the new algorithm, while added sugar would see products lose stars.

“We’re calling for Health Ministers to introduce added sugar labelling on all packaged foods and to ensure that added sugar is more heavily penalised in our Health Star Rating system” Ms Przhedetsky said.

The Health Star Rating system is currently undergoing its five-year review and a tweak to the algorithm is just one of CHOICE’s recommendations to change the ratings for Australia.

The consumer advocacy group has also called on the government to make the stars mandatory for all food and drink products and ensure the labelling policy development and oversight was free from industry influence.